Metro tiles came to the stage in 1904 when the New York subway opened. The subway facilities had metro tiles on the walls, which gave it an appearance similar to brick and add a more personal character. Metro tiles were supposedly created by artist John LaFarge, who worked with George Lewis Heins and Christopher Grant.

Heins & LaFarge worked with Faience Grueby and Rookwood in the development and production of metro tiles, which were resistant and capable of withstanding frequent and aggressive maintenance over time.

Metro tiles are known for their simplicity, elegance, and resistance. They usually undergo dry pressing and are glazed in flat colors with a matt or gloss finish.

Below are the advantages and types of metro tiles.

Metro tiles kitchen are usually rectangular or square and hexagons, which can be found in different sizes, usually small sizes around 10 by 20 centimeters. Manufacturers produce them in bright white and in very striking matte colors to appeal to all types of tastes and requirements.

Interestingly, metro tiles kitchen are extremely hygienic since they are manufactured under high pressure, which adds durability and makes them easy to install. Because of their elegance, they are mostly requested by both designers and companies.

White metro tiles are a type of classic metro tiles in the ceramic world that are now back in fashion, giving light and spaciousness to small areas like the kitchen and bathroom.

One of the reasons to choose white metro tiles is that they reflect a lot of light and transmit spaciousness. In the beginning, they were going to be used only in metro stops. 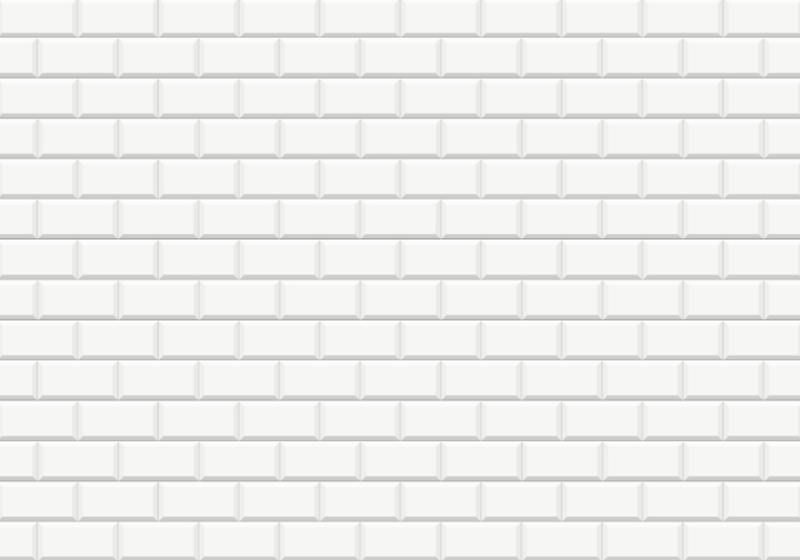 Metro tiles bathroom are always sold like hotcakes, as they adapt to any style. Manufacturers have created metro tiles in diverse colors, without beveling, and with relief. Metro tiles allow you to combine tiles of different designs to attain a more original style.

These metro tiles have been gaining ground in the decoration of kitchens and bathrooms, mainly in recent years. People love grey metro tiles because they convey character and never look dated. 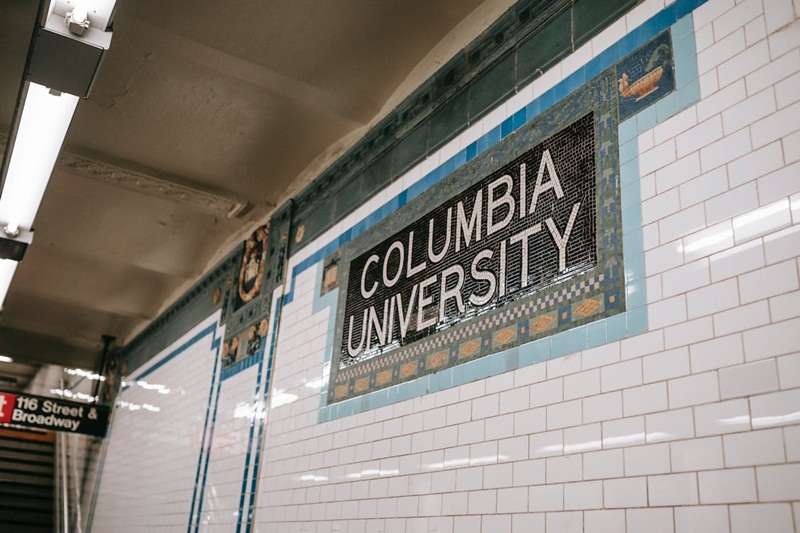 Neutral colors and green metro tiles are also used in the styling of kitchens and bathrooms. What distinguishes grey metro tiles from the rest is their ability to fade into the background. Green is compatible with pink, blue, and soft pastel shades.

Apart from the beveled tile, rustic metro tiles take on a country air in this format. Neither the edges nor the surface is smooth, being the look of traditional bricks, but more colorful. You can highlight the shape of rustic metro tiles with joint paste in a different color from the piece, 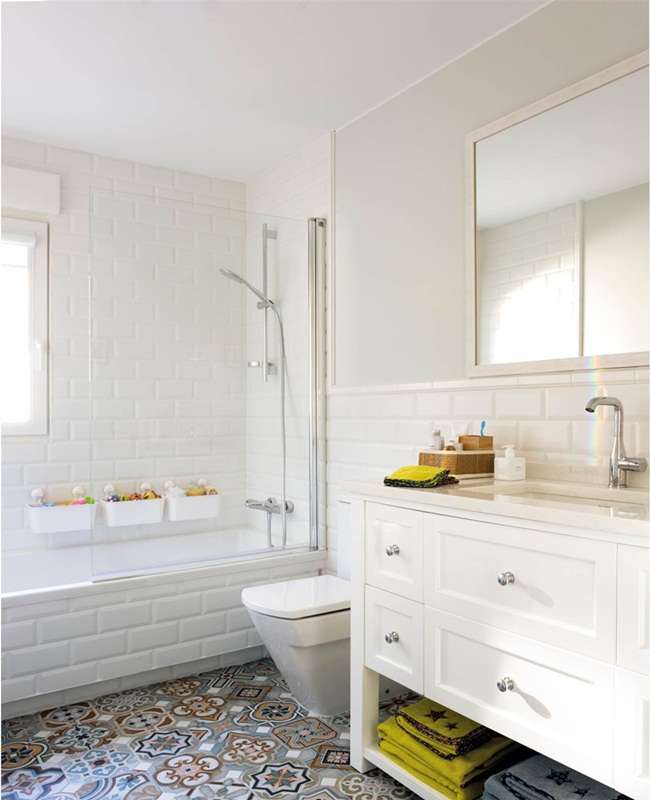 A very decorative way to place metro tiles is this, mock herringbone or herringbone. Here, elegance goes one step further with the pasta between the joints, which must match the color of the mirror, the shelf, the sconces, and the taps. 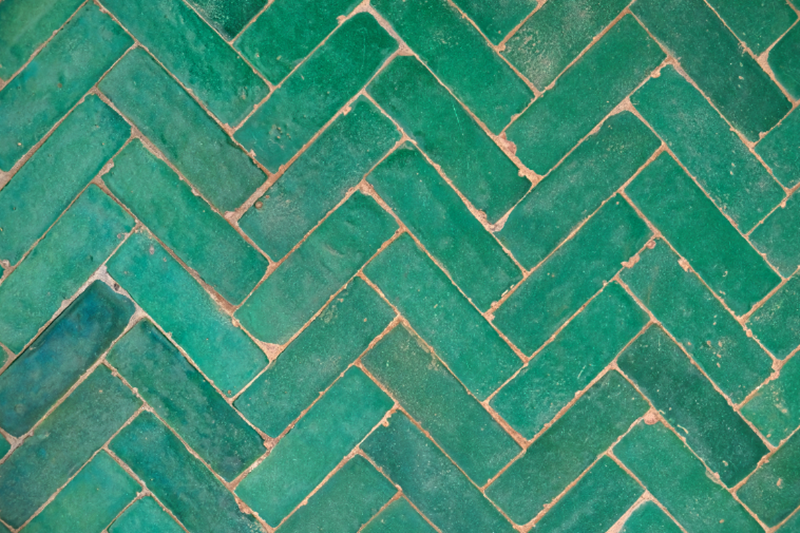 These are some advantages of installing metro tiles:

Since they are smooth and have a glossy finish, metro tiles are easy to clean and hardy-ever suffer damage when cleaned with products.

Although metro tiles are always in great demand, it seems incredible that they are found at such affordable prices. The price of metro tiles starts at €7/m2.

4. Variety of colors and sizes

Metro tiles can be found in a variety of shapes. They are in a small rectangular, square, and hexagonal format, which increases the number of design options.

Remove all the tiles from the wall. The wall must be free of tiles and ready for new tiles. After this, you should moisturize the wall with water and a special tile glue using a notched trowel. Spread the water and the glue evenly on the wall before laying the metro tiles.

Put the level and take measures of the area where you are going to put the tiles on. Do this before you start putting the metro tiles. Then, start by placing the first metro tiles with the aid of a spacer to keep distances between each tile. Make sure the tiles are firmly fixed.

After having achieved the design, we proceed to prepare the mortar mixture in the container to add it between the spaces of the tiles or fill them to prevent dust or dirt.

To achieve the metro effect, oval metro tiles are great. Use a small trowel to maneuver and have that effect. Use a sponge to clean the excess mortar and see if more mortar is needed. Be careful when doing this.

In the case of using square tiles, there are usually no problems. They are generally placed in a continuous joint (that is, forming a cross at the joint), and the only thing we have to decide is whether we will place them straight or at 45 degrees.

The increase in demand for subway tiles in the kitchen has impacted many homes. Metro tiles add an aesthetic, simple, glamorous, and fashionable touch.

This has made it possible to provide variety for all tastes, from the simplest, such as white, which is what most customers are looking for, and what is also on the rise, which is black. The shapes also play a key role. Metro tiles can be rectangular, square, or hexagonal.

Metro tiles are a type of classic slab that has remained unchanged over time. Metro tiles are emblematic pieces that represent the essence of ceramic material. They transmit sensations that make you fall at first sight.

Ernesto Luis is a Venezuelan writer with 7 years of experience in different niches, such as lifestyle, fashion, health, culture, and anime. He loves reading about multiple topics and is always researching to inform readers about home and health trends.

The Benefits of Residential Window Tint

Designing a Home with Your Furry Best Friend

Things to Consider When Building a Pool House